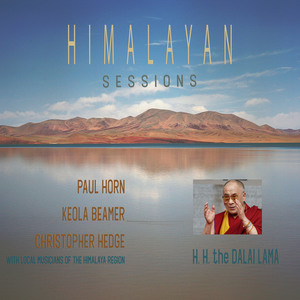 Himalayan Sessions is a CD featuring a tour de force of award winning inspirational musicians and teachers that span the world. It features music recorded on location in Nepal, Tibet and Bhutan with local musicians mixed together with Award winning Paul Horn, Keola Beamer and Christopher Hedge.The album also features ...

Nobel Prize winner His Holiness the 14th Dalai Lama sharing his wisdom and words on four uplifting songs. The music is a result of years of recordings, starting in 1991 with Tom Vendetti’s documentary films that have been featured on PBS and around the world. The album authentically taps into the spirit of the Tibetan culture, people; expressed in compassionately, honoring their struggle for cultural reunification and free access to their homeland.

Proceeds from this album will go to the “Aloha Music Camp / Mohala Hou Foundation” a 501(c)(3) agency to promote Aloha around the world. Aloha Music Camp is a week-long immersion into the music, dance, and culture of Hawaiʻi and providing ukulele's to third world countries.

Within Hawaiian culture, the concept of aloha embodies a beautiful kind of sanctity. In Western parlance, the closest embodiment is found in the word “love”. Hawaiians think of aloha not so much as a philosophical concept, but more as a way of life, the object being to try to live one’s life in a spirit of aloha, to reach out and connect with others, make  good decisions, and shape one’s  life under the auspices of this all-encompassing concept of universal love.

So when the late, world-renowned flutist and “father of New Age music” Paul Horn teamed up with Emmy awarded world music composer Christopher Hedge and Hawaiian traditional music icon Keola Beamer to create a compilation of songs aimed at spreading and articulating the concept of aloha across cultural divides, only the inspirational words of His Holiness, the 14th Dalai Lama seemed to possess the precise level of universal spiritual eclecticism to accompany that music.

Himalayan Sessions compiles contemplative compositions by these world music icons into one unique album release, 100% of the proceeds from which will benefit the Aloha Music Camp, which provides ukuleles to children in third-world countries.

Songs on the album had been compiled by Maui filmmaker Tom Vendetti to serve as the soundtrack for his documentary films “Journey Inside Tibet,” “Mount Kailash — Return to Tibet,” “Tibetan Illusion Destroyer,” “When the Mountain Calls: Nepal, Tibet & Bhutan.” and the Emmy Award winning film “Bhutan Taking The Middle Path To Happiness”.

“The concept behind this whole project started with a conversation that Keola and I had a couple years ago, and the spirit behind it is literally to try to spread the concept of aloha around the world.,” Vendetti explains. “The project will support bringing ukuleles to underprivileged children. One hundred percent of the funds from the CD will go to this program.”

One other thing that's really significant element is the whole idea of preserving culture, especially indigenous and native cultures, and this music really correlates with that, because all of the music was actually recorded, on location in Nepal Tibet, and Bhutan, along with the Dalai Lama's words in Dharamsala, India. Vendetti was fortunate enough to interview the Dalai Lama for 45 minutes at his home in Dharmsala, India. A good deal of the Dalai Lama’s spoken word on the album reveals that the precepts of Tibetan Buddhism are strikingly similar to the spirit behind aloha ...from espousing compassion for all sentient beings to alerting an urgent need to protect and heal our environment.

“In our families, idea of aloho has been passed down for generations,” reflects Beamer. “My family traces its  lineage back to the 13th century in Hawaii. And the spirit of aloha was intrinsic in our family for its entire existence on this planet. Maybe it came from this sort of realization that Hawaii was just incredibly remote. And the ancient navigators who found it realized how beautiful and precious it was/ We have a lot of aloha for our environment and we try to protect it as best we can. But there are many challenges as Hawaii becomes more Western influenced, more developed, resulting in more stress to the native people of Hawaii. You know, it's actually harder for people to live with aloha because of the challenges on every side”.

Many of the songs on the album are uplifting and imbued with a collectivising energy, yet the album’s conclusion, entwining the various voices and languages into an expansive meditation, lulls the listener into a place of contemplative ease. This points to the duality of music’s spiritual power. "It’s the Truth in music that moves us, what was really happening when it was created,” muses Hedge, whose soothing compositions like “Reflections” and “Morning Prayer” are thoroughly enhanced by his legendary studio chops, while the hypnotic soundscape, “Mount Kailash Trek,” is said by a Maui Times reviewer to venture  straight into “chill-out music territory.”

“It can come in any form, any genre, all levels of energy or quiet, and the experiences of the artist will still come through. It’s a moment in time…  like a photograph. In this case, Keola, Paul, Tom and I are observers from a very different culture. The sense of peace that these cultures express is such a contrast to sometimes very challenging lives. It’s our job to communicate what we experienced through this music, find it’s essential truth and stay out of it’s way.”

The link between music, healing, and spiritual change is one Horn, Beamer, and Hedge have been exploring in their distinctly respective ways for years. They created the Himalayan Sessions as a vehicle for spreading aloha and promoting a more unified world, free from the dividing principles of culture, faith, and nation. This album is the latest in their ongoing efforts to increase dialogue, respect, and engagement via education and creative projects.

Beamer feels strongly that it’s time for us to all move beyond the division, into greater spiritual connection and mutual recognition. He puts it in deeply personal terms in describing the magic of communicating through music across the cultural divide. “We didn’t share a language and many expert musicians could not read Western music notation,” smiles Beamer. “I really developed a kind of a spiritual connection to people making music sometimes with pretty bare instrumentation, sometimes crudely constructed instruments. I just love the feeling of human beings trying to create stuff in their own way, and their own voices, their own tonality.”

Vendetti notes that many native cultures are disappearing rapidly around the world. But at the same time they are optimistic that there is also this new realization that there is so much wisdom in these cultures that they want to get the word out about, to preserve, in part, with this effort.

Paul Horn who is legendary, in terms of recording in the Taj Mahal, the Great Pyramid, and known as the father of New Age music, was no stranger to this idea that powerful musical movements emerge from these interactions, in which people from radically different backgrounds are tasked with the creation of music, and in doing so, we reaffirm our common humanity.

Says Hedge of his time working with Horn, “I spent most of my life creating, traveling and deeply listening with Paul. If I were to boil down his participation in life to a single word, it would be ‘respect’. What we all hear in his playing is the unfiltered experience he is having. That embodies respect for the place, his moment in it and his ability to play the instrument to interpret it. He would often say, ‘Master your instrument, whatever it is. Then you are free.’."